The brand-new Theatre Studies program at my school, Western University, is off to a roaring start. We’ve got a small but mighty crew this first year, plus lots of interest in the wings for next. We’re not rich, yet we’re full of promise – which means we’re also making do with what we’ve got until we’ve gathered enough momentum to attract fresh investment. That is, we’re using found spaces to make performances, we’re Skyping in artists, and we’re taking every opportunity to leave campus in order to see good theatre and performance work in our own and nearby cities.

Twice recently I’ve taken small groups of my Theatre Studies students on field trips to fairly unique performance-related events; these trips have reminded me of the pleasures of leaving traditional teaching spaces behind in order to learn from, among other things, the precariousness of being out in an environment I can’t fully control. Last October, I drove (I drove!) to Toronto with six students from my Performance Beyond Theatres class, where we spent 7pm through 1am taking in the city’s annual Nuit Blanche all-night art festival. The seven of us – Sarah, Caitlin, Reggie, Rita, Jonas, Kat, and I – parked, ate dinner, and then wandered the streets with a basic road map of performances we’d starred as worth visiting. We sought shelter in the city’s underground PATH network as the temperature dropped, discovered an extraordinary installation performance in a parking garage – Vertical City’s 2uTopia – and then found ourselves willingly shivering and chattering outside once more, as we stood awe-struck before another gorgeous installation about the precariousness of labour and the ravaging of the environment in the global marketplace (Lars Jan’s HOLOSCENES). 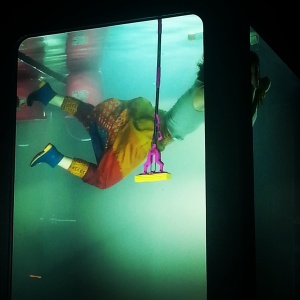 I’m convinced that the rhythm of our meandering made all the difference to the learning experiences we had that night. Figuring out where to look, what to look at, what to make a note of, and what to dismiss was the basis of our labour as artists, advertisers, retailers, and fellow spectators clamoured for our attention. I was as new to all of it as the students: despite the fact that I have been to Nuit Blanche many times before and am adept at navigating downtown Toronto, where I used to live, I was no more sure than they were whether or not, for example, the trim woman in the fancy yoga trousers meditating in a bubble was a piece of “real” art, or a shill for Lululemon. We had to figure it out together, and once we had (yup, it was advertising) it became a teaching moment: I explained the relationship between performance art and yoga pants as commodities in the “creative city,” and we proceeded to debate, as we walked on, whether or not art and retail could or should coexist at a festival like Nuit Blanche. 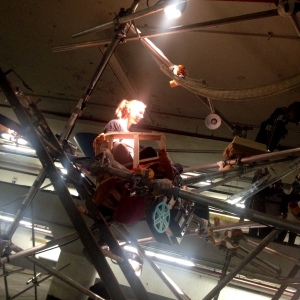 Not all of our outings are to see performance proper, though. This afternoon I drove two of those same students, Jonas and Sarah, back to Toronto to take part in a colloquium at the University of Toronto’s Centre for Drama, Theatre, and Performance Studies. I’d been invited to give a talk as part of the event, but the timing conflicted with the History of Performance Theory class I’m offering this term. Since the class was working on just one text this week I thought it would hardly matter if I cancelled just once; I also thought, however, that the students should have the option of coming with me to the Drama Centre. After all, I’d be speaking on a subject – feminist performance theory – directly related to our work in the class. And I’d be doing it in the very room where I took Performance Theory myself 15 years ago.

A full afternoon’s field trip is a big commitment, and some of the students in the class did not feel comfortable missing other classes for an outing that was not, strictly speaking, required. But Jonas and Sarah were game, and I’m glad they came. Not only did they have the chance to sit at the long seminar table with a group of Master’s and PhD students and faculty, listening to both talks on the agenda and to the wide variety of questions posed during the Q&A, but they were also able to observe how other participants were behaving in this semi-formal academic environment. Knowing that they would be attending along with upper-level students, I prepared my talk with a heterogenous audience in mind; the excellent senior PhD student who presented alongside me, meanwhile, gave an exceptionally clear presentation that inspired both Sarah and Jonas in its style as well as its content. On the way home we talked about it, as well as about the techniques of other teachers they’d had who were especially good at sharing complex information with a student audience. From their feedback, as well as from my fellow presenter’s clear style, I learned a great deal myself from today’s experience.

Leaving campus is like skiing off-piste: you’re in uncharted territory, even when you sort of know where you’re going, and you need to be ready for unexpected stuff to happen and, when it does, to adapt and regroup. That’s a bit nerve-wracking, of course, but it’s also refreshing and freeing. Thanks to having my students at my side I learned more from both Nuit Blanche and today’s colloquium than I would have done alone; they noticed things I might not have otherwise noticed, and thanks to my reactions to their reactions they thought harder and longer about stuff they might otherwise not have stopped to reflect upon. For all of us, then, a win-win.

Glad to be home safe,

2 thoughts on “On leaving campus, for a change”