Last week, I began my reflection on the two semesters just past by remembering things that went really well during the 2014-15 academic year; today, I offer my reflections on three things I’ve identified that need tweaking as I try, valiantly, to Prep Ahead for 2015-16. (It’s a work in progress.) 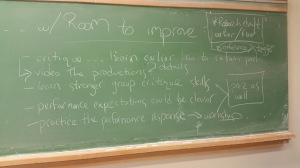 On our final day together, my 20th Century Theatre students and I talked about all the ways our year was amazing, as well as many of the ways it could have been even better; my thoughts below are culled in part from that discussion, and in part from my own impressions of problem spots in all three of my 2014-15 courses.

(Note: if you missed the first post in this short series, as well as the preamble describing the nature and purpose of this reflection exercise for me, click here.)

I built two peer-assessment exercises into 20th Century Theatre this past year, and I made a hash of it. Students in that class work in groups throughout the year; the groups are set in weeks 2-3. Each group prepares two major scene studies (or more – see my previous post for my reflections on performance workshops) and a presentation in the penultimate week of class, all for marks, plus we do lots of ad-hoc group work during different in-class learning exercises throughout the school year. The peer assessments this past year came at the end of each semester, and in each case I forgot the obvious: that students don’t know how to grade each other, and that they are (understandably) really uncomfortable doing it. Less committed students who screw their groupmates on shared tasks are unlikely to own their actions (or even to acknowledge them!), while the hard working bunch may have few if any resources to draw on in order to take the measure of their group, as individuals and as a team, fairly and accurately. Plus, mostly by year’s end the groups are full of friends; who wants to grade their friend?!

I’ve talked about this issue on the blog already, and in that post I noted how, at first blush, I thought the peer assessment went really well … until it dawned on me that the two groups that had had serious problems at various points in the year had not been able to look straight at those problems or talk about them with the troublesome group members involved. At this point I recognised that, in order to assess the assessment process fully, I really needed to ask the students to tell me what had been useful about the exercise, and what had been challenging. This is what they told me:

The latter two of these suggestions, which are non-starters to me, are telling: students are scared of having to do the grading. They implicitly understand that it’s incredibly hard to do fairly (uh huh!), but that’s exactly why I think peer assessment is the ultimate teachable moment, one of the few places where in-class work has a direct bearing on the kind of stuff we are asked to do as citizens in a functioning democracy every day.

The first three comments are, in this respect, even more eye-opening: they reveal the extent to which I need better to prepare students for the rigours of assessing themselves and each other. I need to create a welcoming, inclusive space; I need to act as a mediator, without taking over the assessment discussion, in order to manage the group dynamic (and model good negotiating skills!); and I need to incorporate multiple self-assessment exercises into the year’s work (not just one! Not just two!) in order that students are fully prepared for the scale and significance of the task when it happens in April.

I haven’t yet worked out the details of how I’m going to reshape the peer assessment task, but once I do and next year’s class is up and running I’ll report back on how it’s going here on the blog. I’m committed to doing peer assessment properly this coming year!

I decided to use casual, ad-hoc presentations, not for marks, in my Performance Beyond Theatres class in Fall 2014; the idea was to get students used to talking to and in front of each other in a semi-formal (but low-stakes) way as often as possible. It did not go to plan. Each student was invited to take on the task of introducing a theorist, or a key concept, once (at minimum) or twice during the term; we settled each week on who would present the following week. I figured students would understand what I meant when I said this was low-stakes work, easy to prepare in 20-30 minutes at most and then to present in five minutes or less; I even modeled “what I wanted” from an ad-hoc presentation in our second week together.

What I forgot, of course, is that students are not used to “low stakes” at all, let alone low stakes coupled with the dreaded words “class presentation”. With most clearly terrified of the labour as well as the stand-up-and-talk expectations, only the truly keen volunteered in the first few weeks. After that I had to pull teeth. Eventually, I also found myself forgetting about presentations at the beginnings of classes (not THAT low stakes, Kim!), which then encouraged students to see these presentations as not that valuable or important after all, and then… enough said.

Meanwhile, in April, I learned from my students in 20th Century Theatre (who were tasked with creating final group presentations and who did a truly outstanding job with them) that my instructions regarding expectations for those presentations were not clear enough. Granted, the brief was (intentionally) broad: select a “hot topic” (from the many the class covered) that has become extremely important to your group, as a team of learners, over the year, and create a 10-minute presentation, in the mode of your choosing, about that topic. But I also generated a rubric for the presentation that was highly specific: it explained in detail the criteria for grading as well as the specific components I wanted to see in the finished presentations. We did “mock” presentations the week before the final presentations were due (built on this model, given to me by Charlotte Bell) and students were asked to grade their own “mock” work using the rubric in order to get used to it. The results, during the final presentations proper, were simply terrific. So wtf?

I can only conclude that, in both cases, I missed the mark by not offering enough information about expectations early enough, and by not clarifying properly the role presentations played in our course’s learning outcomes. I am tempted to try the “low stakes” presentation model in Performance Beyond Theatres again, but this time around I think I would invite students to select presentation slots and topics in advance, and I think I would incorporate a peer critique into the process (for more on crits in the classroom stay tuned for my next post, on cool new stuff I want to try). Certainly, “critique” is not necessarily compatible with “low stakes”, but I think it has two advantages: inviting students to take the work seriously, and also encouraging them to understand that “critique” is not the same as “grade” – and why that really matters.

All of my classes this past year had websites associated with them in addition to our official yet somewhat dysfunctional “OWL” (“online Western learning”?) course web space (it served as a way to send messages and record official assignment and grade information). The custom websites – I used WordPress for each, for ease more than anything – were spaces where the students and I could contribute to our blog roll, where I could post info about upcoming events, and where students could complete the “blog post” component of their grades. (In my theatre studies classes, students had to post X number of times; in 20th century theatre, which is officially an English lit class, groups had to post reflection pieces after their scene studies.) In 20th Century Theatre, I also had a superb Teaching Assistant, Madison Bettle, who took charge of our website and created what she called a “supplementary course reader”; there, she would post information about texts that she discovered while preparing for class, as well as mini-lectures in support of a given week’s work. (Madison, who is a 19th century prose specialist, knew nothing about modern theatre when we began; to make a place for her on the teaching team we decided she would play the role of the course’s “expert learner”.)

I have become really sceptical about getting students to do online work if it’s not fully integrated into an existing assignment (and even then!). I’ve routinely tried to model regular blog posting as a way to engage with course material after hours, but no matter how enthusiastically I post, few students seem to follow suit. I can’t tell if this is because students think posting to the class website isn’t that important (even if I emphasize that it is), because it’s a task that’s easy to forget, because they aren’t used to having to do online stuff for school (!!!???), or because many students truly aren’t that tech-savvy. My gut tells me it’s because the stakes aren’t high enough in this particular domain – there’s apparently not enough to lose by not posting, even if a student risks losing some marks, so forgetting or ignoring the task carries less anxiety with it. After all, the students in my 20th Century Theatre class routinely reported, in straw polls and anonymous surveys, that the material on our custom website and especially in Madison’s supplementary reader was enormously important to them, and they ranked the site on our mid-point survey as one of the most valuable aspects of the class. It clearly wasn’t that they weren’t going to our online hub – it was just that they weren’t all that interested in contributing to it.

For me, this points back to a more systemic problem: students tend to think university is where you go to get filled up with other peoples’ knowledge, not where you go to make your own – and they certainly do not think it’s where one goes to learn from fellow students. I have tried to use student blog participation as a way to shift this attitude, but I think by assigning blog posts I’ve attacked the branch and not the root: I’ve not communicated clearly enough that the blog is a space where we make knowledge together – and that student knowledge is real knowledge, stuff that has value for marks, but also (and more importantly) beyond that.

What to do in order to begin to address this problem? Given that Madison’s replacement next year may well not be interested in creating a supplementary course reader, and given that the students this year found that reader incredibly valuable, I think the answer is right in front of me: I need to get the students to make the supplementary course reader themselves. This will have to be for marks – probably a good number of them – and I know I’ll need to assign students specific sections of the reader in order to get them to take ownership of a part of it in a real way. But if the project is ongoing throughout the term, and if the stated goal of the task is to create a shared bank of information to support student work throughout the year, I might stand a fighting chance of convincing the class that their self-made knowledge does, in fact, have real, lasting benefit to their gradebooks – and maybe even in their Life After Marks.

Next up: cool new ideas I’m keen to take out for a spin.