In the high summer, full-time academics often get asked what it is we are up to. Or, more accurately, we get knowing, slightly envious looks from people who ask us when we will be going back to work. Although I always gently correct in these situations, letting acquaintances know that we are in our research-intensive term and then explaining a bit about my current writing project, the truth is that most of us are enormously privileged to have large swaths of unscheduled time in July and August (and sometimes May and June, depending on where you work). Of course, such freedom bears with it responsibility: I need to mind my deadlines, and plan work days accordingly. But I’m also fortunate to be free in summer to experiment, try new things, and make fresh discoveries. That is something I happily trade for a slightly less impressive salary than I might make in one of the more timetable-intensive professions.

Regular readers of this blog know that I am a huge advocate of taking breaks and holidays; without dedicated recharging time I become weary and lacklustre, no good to my students or my colleagues. But holidays are also, for me, often a chance to learn and grow – whether as a scholar, a teacher, or just a human being in the world – and so they were for me this year.

I’ve just returned from three weeks in India, my first time in South Asia. I travelled to Hyderabad for the annual conference of the International Federation for Theatre Research (the next post up on the blog will feature a report from my friend and colleague Elaine Aston, on a stunning piece of feminist theatre we witnessed there), and then on to Neyyar Dam in Kerala, to the Sivananda Yoga Vedanta Dhanwantari ashram. 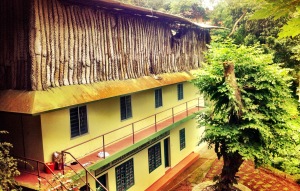 I spent ten days at the ashram, engaged in a rigorous daily program of meditation, chanting, volunteer work, and yoga. This post, and the upcoming part 2, tell the story of what I took, as a teacher, from that time.

The first thing to know about me is that I am probably the last person you might imagine at an ashram, let alone one in a jungle. I only began practicing yoga about five years ago; before that I notoriously resisted it. To this day I find myself cringing as often as not when (typically white, Anglo) yoga teachers close our practice with “Namaste”. (Note to those teachers: while in Neyyar Dam we read from chant books written in Sanskrit every day, and never once did we say Namaste.) I am also hopelessly afraid of spiders, snakes, do badly with mosquitoes, and would rather not shower in full view of a nervous-looking gecko. Plus, I am a fiend about cleanliness. Add all this up and you don’t exactly get Indian ashram, in the middle of monsoon season to boot.

What took me to the Sivananda centre, then? Well, I’m pretty thrifty: I could not imagine someone else (Western, my university) paying my way to India and not tacking a proper holiday onto my work duties. And I’ve had a really, really hard year, with family illness, lots of emotional turmoil, and moving continents all in the mix. (For more context, should you wish it, click here.) Finally, there was the slightly nervy allure of doing something completely outside of my normal: this year, of all years, I felt a pull to step beyond myself, even if only for a short time, to see what would happen if I cut myself off from my world and lived briefly in the shoes of another version of me. Could I let myself relax, in order to perhaps expand myself a bit, as we do in yogic breathing or when practicing poses? I’m always insisting my students challenge themselves to take a leap beyond their comfort zones; it’s only fair that I do the same once in a while.

At Neyyar Dam, the day begins at 5:20am, or 5:15 if you are, like me, unlucky enough to get a room beside the first morning bell (there are two; the ashram is spread across a hillside in the unspeakably glorious Western Ghats). The next thing you hear is the sound of recorded devotional music ringing over the hills from the temple in the town below, and then you’re off, sprayed all over with insect repellant, yoga mat or meditation cushion in hand, hurrying toward the main hall for morning Satsang – half an hour of silent meditation, followed by daily chants, readings, and announcements. Tea is at 7:30, often accompanied by a very small snack of food blessed during the ceremony at the end of Satsang. Milky, warm, and sweet, the tea, offered beneath a tree in the communal courtyard below the hall, provides a small boost of protein and comfort before a challenging two hours of asana practice (yoga poses in the hatha style, in a set order according to Sivananda tradition). By 10am you are ravenous, so it’s lucky that brunch is ready: you head for the dining hall, leave your shoes at the entrance, wash your hands, and then take a place at one of the long prayer mats set facing one another at the far end of the room. Hare Krishna is sung, a mealtime prayer of thanks spoken, and the ashram’s founding teachers praised before everyone tucks in, side by side, eating with their hands in silence. The food is delicious, vegetarian, and bountiful: staff and volunteers return again and again offering seconds, thirds, and more. Finished, you return to the long, communal sink and wash up your plate and cup. Many hands, light work 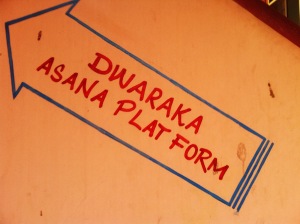 After the meal it’s time to help with chores; everyone, including staff, is assigned a modest duty that might take 15-30 minutes each day to complete. (Mine was emptying garbage bins; at first I grumped, until I realised it was among the quickest “karma yoga” jobs to finish. Suffice to say I have a new appreciation for the labour of garbage collectors!) From noon until 2pm ashram visitors can take optional meditation and asana coaching classes, and then it’s time for a lecture on some aspect of yoga practice or Hindu spirituality. Herbal refreshment and a small snack appears under the tea tree at 1:30pm, and at 3:30 a further two hour asana class is held. A lighter meal is served at 6pm, and at 8pm evening Satsang takes place, closing the day with another round of meditation and chanting, always accompanied by music played on a keyboard, with tambourines and other noise-makers. It is raucous, joyful, soulful. And then, thankfully, bed.

Like many taking part in the ashram’s “yoga vacation” program (it runs every two weeks throughout the year), I found this schedule thoroughly exhausting at the start, and I was briefly freaked out by both the amount and the fervour of the devotional practices that form the heart of Satsang. I’m not a morning person by any means, and for the first few days the morning bell tore me out of dreams, leaving my eyelids droopy and my chanting mostly yawns. Eating only twice in the day, and right after exercise, took getting used to as well; at first I seemed to starve profoundly in the mornings, and I wolfed far too much brunch as a consequence. And then there was the yoga itself. Even the beginner classes at the Sivananda centre progress quickly, and when I arrived the previous group’s beginner sessions had already moved on to poses I consider relatively advanced, from headstand to crow. As I’ve been doing yoga for some time now I challenged myself in the intermediate classes and set a goal for my stay: to manage a headstand, completely unaided. (I’m proud to say I achieved this, for three whole seconds on my penultimate day.) Nevertheless, every day was gruelling, with four hours of yoga followed by much cross-legged sitting for meals and Satsang. My body ached.

There were fringe benefits to all this, though. Soon I was sleeping soundly at night, waking before the bell, and then giving myself permission to nap after brunch. I began to find the regular chanting enchanting; what was at first intimidating and confusing grew familiar as I realised I had learned the words to a couple of our daily chants and could join in with tambourines and clapping as the pace sped up and our voices lifted higher. I confess I remained a professional skeptic during the lectures, frustrated in particular with what seemed to me a deeply anti-intellectual, anti-materialist approach to the idea of the human mind, but more and more I grew to appreciate the balance and inquisitiveness with which Nataraj, the ashram’s longtime director, handled questions from the group. I spoke up more. And then, on my final Saturday, I volunteered to curate our group talent show. (Ok, so that part is, perhaps, a touch predictable. Drama queen, me.)

The greatest benefit I derived from my time in Neyyar Dam I could not have imagined before arriving, though: I discovered, unexpectedly, what it is like to be a student again. And not just any student, but one who comes from outside the school’s norm, is unsure of everything, doesn’t speak the language, and isn’t especially good at lessons. In the second part of this post, I’ll share in detail the valuable lessons I learned when I found myself watching life at the ashram through the eyes of one of my own typical students: an average achiever. 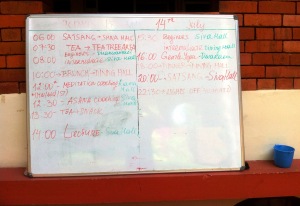 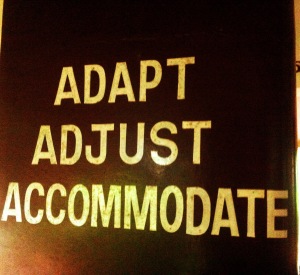 6 thoughts on “On becoming a student again: ten days at the Sivananda Ashram in Kerala, South India (Part One)”