This past Wednesday I took part in Fall Perspectives on Teaching, my university’s semiannual teaching conference. It’s an opportunity for faculty and graduate student instructors to ease back into the autumn teaching term with collegial conversations, practical sessions (on things like new classroom technologies and copyright compliance), and – of course – inspiring keynote sessions.

This time around I was honoured to be part of one of those keynote sessions: a forum theatre workshop focused on managing cultural difference in the classroom. This event capped off the day, and was organized by Western Teaching Support Centre staff Aisha Haque and Nanda Dimitrov, as well as Naomi Tessler of Toronto’s Branch Out Theatre, who also facilitated the session.

What is “forum theatre”? It’s part of a system of performance-driven social activism called “Theatre of the Oppressed“, which was pioneered by the late Brazilian director Augusto Boal. In a piece of forum theatre, spectators witness actors perform a scenario that includes (typically politically inflected) conflict and tension. Then, the scene is played again, and this time spectators become “spect-actors”: they are invited to stop the action at moments they feel frustrated or inspired to make a change in the scene’s trajectory. They are then invited to come up onto the stage and take the place of one of the actors, improvising the scene in a new way in order better to address one of the problems it stages. At its best, forum theatre offers a means to empower communities; it’s not “drama therapy”, but theatre for social change.

My job on Wednesday was to offer a (very brief) introduction to Boal and his work and then to encourage my colleagues to put aside their stage fright and boldly take part in the play as spect-actors. (I was also meant to take part: Aisha, Nanda and their colleagues were a bit worried nobody else would jump in. They need not have been!) Since I’m a drama teacher and also very comfortable speaking to large groups I was daunted by none of this. I knew what I’d say about Boal, how I’d tease out my colleagues’ inner extroverts, and I imagined the forum bit itself would be great fun. I had read the scenarios in advance, so I also knew that the “change” the play was trying to encourage wasn’t really for me. I already have a lot of training in sexual and cultural diversity both inside and beyond the classroom, and as a teacher I pride myself on fostering an inclusive and respectful learning environment. I imagined that, once my introduction was over, I would simply sit back and take similar pride in watching my colleagues from across the arts and social sciences encounter the transformative power of theatre – the “impact” of the arts in action.

I definitely got that – and it felt just wonderful to see the work of the theatre regarded as socially valuable by a group of scholars and teachers who had probably thought little of it (beyond its entertainment value) before. But I – drama “expert” me, teaching “expert” me –also got much more than I bargained for! I thought I knew already how to address the ugly discrimination in the scenarios we were watching; when time came for me to jump into the story, however, I ran into some trouble. And the trouble proved really instructive.

I stopped the first scene at a point where the professor is trying to manage a “know-it-all” student, who really wants to keep the discussion about Greece’s current economic misfortunes “on track”, alongside two other students who are shy to speak but have important personal perspectives to share (and who feel vocally excluded by “know-it-all” Claudia). The spect-actor before me had prompted a shift in the dialogue; the professor in the scene then invited one of the students, from Egypt, to share her perspective, but “quickly”. (In the world of the play, he’s impatient and anxious.) Instead of asking to roll the scene back to the beginning, I asked to start from that moment of grim professorial impatience. My plan was to play the professor as someone in mid-mistake, realising they had screwed up and needed to turn things around. This happens to all of us: when was the last time you said the wrong thing, or revealed too much of yourself, or unintentionally marginalised a student in class only to see their face and know, in that minute, your own error (and even shame)? Rather than starting again from the beginning, and playing some version of the “ideal” professor who would never discriminate against any student or let a mouthy keener speak rudely to a colleague, I decided I’d toss myself onto the fire and see how I reacted, and how others responded to my reactions.

I’m usually pretty good in a classroom crisis and I was pretty sure I could get the scene back from the brink, but I was wrong. I thanked the student who had spoken up with her personal perspective, and then commended her doubly because I knew she had been struggling with speaking in class. (Her struggle with Canadian expectations around class participation, given her different experience of schooling in Egypt, was the point of the original scene.) My (studio) audience of fellow teachers reacted audibly to this; they clearly thought I’d made a wrong choice – even though I hadn’t said anything I wouldn’t say in a classroom of my own. Instantly I felt the mood shift, and with it my focus shifted. I was no longer aiming to change the trajectory of the scene, or “save” the crisis; now, I was aiming for approving reactions from my peers. From this point on, I felt myself flailing; my attention had been diverted, and I wasn’t thinking about what was best for the students in the scene anymore. Mostly, I was showing off: I figured, if I could not play for results, I could at least play for laughs.

(Boal at right: not afraid to look silly for good reason.)

After a forum scene featuring a spect-actor ends, the facilitator asks that actor to talk about what might have changed as a result of their intervention; then, the audience weighs in. In the case of my scene, not much changed for the better, but I did realise a few really valuable things as a result of the problems I experienced on stage.

First, it dawned on me how much I perform for my students, and how much my investment in myself as a “good” or “natural” performer may get in the way of teaching and learning more often than I might imagine. My classroom persona is witty, clever, smooth, and funny. In other words: I play to win them over, and I play for laughs. Students generally love this: funny beats boring at 9am every time. But let’s face it: if I’m overly focused on who I am (IE: who I am playing) in front of them, then I can’t be fully focused on them and what they need from me.

Now, don’t get me wrong: I’m not saying that teachers need to be selfless givers of knowledge – not at all. The job of teaching is challenging and messy, and in the best classrooms knowledge is collaboratively made, not “given”. I’m simply trying to acknowledge that sometimes I overdetermine my classroom performance, and when I do I am probably doing everyone in the room a disservice, including me. (Man, performing for students is exhausting!) Before our forum session led me to embarrass myself in front of about 150 of my peers, I may not have been fully willing to own that. Now I am.

Second, I discovered that the stuff that works in class for me works because my classroom is a community – albeit an imperfect one – rather than just a bunch of disconnected student bodies. As we debriefed the (largely negative) impact of the choices I had made in my version of the forum scene, it occurred to me that I’d made similar choices before in classes, but the effects in those cases had been quite different. Why? I think it’s because, all “performing” aside, in my classes I work hard to establish respectful, human connections amongst all of us (teacher, T.A., students) right from the start of term. I refer to us as a community of learners even before we really become that thing. I divide students into working groups that I curate to ensure a diverse mix of experience and comfort with things like group work and public speaking, and we spend time getting to know one another before the really hard work sets in. I also try to demonstrate to students that I’m a totally fallible human being; when I’m wrong I usually say so, and if I don’t know the answer to a question I’ll admit that too. So while it’s true that sometimes I over-perform for students, showing off a bit and maybe sacrificing learning engagement for virtuosity, it’s also true that I try to foster a space where we are all free to be ourselves, safely. That mix – of virtuosity with totally fallible humanity – characterises the spaces in which I work. 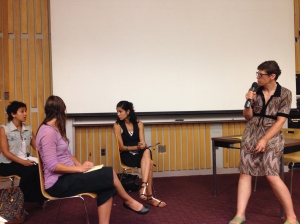 In the forum scene, I over-performed out of sheer anxiety – until I didn’t. At a certain point, realising things had gone kinda Pete Tong, I pulled back and said to the students: I’ve made a mistake. We need to dial back, perhaps turn back to the reading for a minute, regroup. This was the opposite of performing: it was me being me, being as honest as I could be in that moment. In my own classroom I would have done nothing less. Except this time the effect was, once more, the opposite of what I expected: the “students” in the scenario did not trust the professor I was playing, nor each other, and so the audience took this honesty for an attempt at deflection, at sweeping a problem under the rug, at turning away from the students as opposed to toward them. Without trust in one another, my being honest with them simply read as insincere, or even cowardly.

I learned one other very important thing on Wednesday, and I hope my fellow spect-actors did too. It’s so much harder to regain equilibrium from inside a troubled teaching scenario than it is to imagine the ideal from the outset, when you can script the scene according to your own expectations of yourself as an enlightened instructor. My talented colleagues offered us some absolutely brilliant revisionings of our play, including some inspired solutions to overt classroom discrimination; most of them, however, chose to start scenes over and play them their way, based on a set of assumptions they hold about what kinds of teachers they already are. And they are amazing teachers! But I am too – and yet I still got stuck, and that getting stuck led, for me, to important, unexpected learning.

Thank god for the pedagogical power of the theatre.

Do try this at home!