I’ve not been watching any of the U.S. presidential debates – neither of the two main events, nor the VP candidates’ debate. This isn’t because of disinterest or distance; on the contrary, as a Canadian I’m uncomfortably close to and heavily invested in the outcome of this contest, and as a woman and a feminist I could not imagine the stakes to be higher. The campaign has become nothing less than a referendum on misogyny: a man who revels in violent language, casually admits to sexual harassment, and displays bald-faced ignorance of raced and gendered realities (alongside a swath of sociopathic behaviours) is up against a talented, openly feminist woman with three decades’ worth of experience in federal politics. There’s just no other way to sign it.

The reason I’m not watching the debates is because they cause me profound, deeply-felt anxiety; it’s just so exhausting, upsetting, too hard. (For many women, it has been triggering. Trump is a bully and a predator; watching that behaviour in others, when you’ve been personally victimised, can leave you emotionally shattered and physically ill.) Of course I eat up the commentary afterward – in the Guardian, the Globe and Mail, the New York Times and the Washington Post. I obsessively check Twitter and Facebook for reactions. I look for balance – what did the left think? What the right? – in an effort to figure out what a cross-section of us are really thinking. I know this is a fool’s errand, but it has become compulsive behaviour for me.

When I walk into my classrooms, I look at my students and wonder hard what they are thinking. Are they watching? Are they fearful like me? Is Clinton v. Trump on their radar? Are any of them Trump supporters – or simply not sure? (How can you not be sure?!?! I fear blurting out to them…)

Given the raw abrasion I’m experiencing, I’m understandably very much afraid to bring the election, in any detail, up in classes. Quite apart from the fact that it’s not professional for a university professor to express her specific political views in the classroom (we have enormous influence, and students still believe, sometimes quite rightly, that profs want them to parrot views back to them), I honestly can’t imagine mediating a reasonable conversation about this election campaign with students right now. It’s too hot a button – for me if not for many of them.

And yet. And yet. At this moment, in America and its spheres of influence (which, let’s be honest, is still most of us), nuanced conversation is under siege. Reasoned debate has flown the coop – Trump is working hard to suffocate all space for it. As Kenneth Pennington wrote in the Guardian Monday morning, the Trump circus is depriving Americans of exactly the kind of discussions citizens of an advanced democracy deserve to be having at a crucial juncture in their nation’s political and economic history. They are already losers in this contest, but, if there is anything yet to be salvaged, it’s the future of difficult ideas in the American public sphere.

Which means that now more than ever, my students – students across North America, and beyond – need to talk about this election. They deserve the tools of critical engagement and nuanced expression our arts and humanities classes foster, precisely because Trump mocks the notion that complex, nuanced arguments are a social good. They have a right to dissect the orchestration and dissemination of his, as well as Clinton’s, political performances. They have a right for a strong basis for careful judgement. 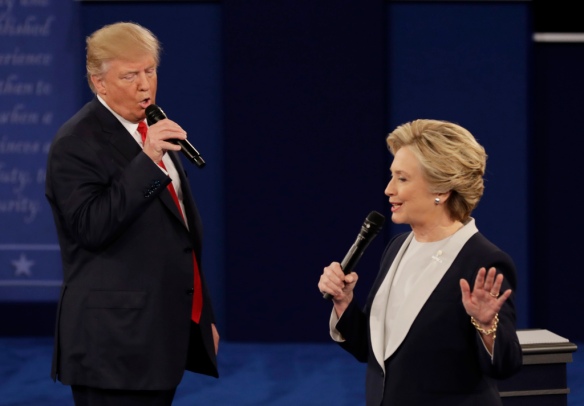 As a teacher, it’s my responsibility to give my students the intellectual means to make sense of what is happening right in front of them, even if I choose not to invite an open discussion of debate specifics, or of Trump’s most astonishing, demeaning statements.

The question, of course, then becomes: how?

This autumn I’m teaching a second-year core theatre studies course called “performance beyond theatres”; it’s essentially an introduction to performance studies, the interdisciplinary field that examines the performative dimensions of social and cultural behaviour in a wide array of contexts. Luckily, one of those contexts is politics; politicians are rhetoricians, after all, and rhetorics is talk-as-show.

Performance Beyond Theatres gives me a natural opening for political discussion, but it also offers me the chance to ground that discussion in forensic description and textual analysis, which together let us unpack political behaviours with a (relatively) objective eye. I find this relative objectivity very useful: nobody need openly stake a claim to a “side” in order to participate in the discussion. Rather, we examine together how politicians enact their personae, how they use language to inculcate the realities they want us to believe in, and how we, as interested and critically attuned audiences, might react in turn. (Between fire-brand high-fiving and utter disbelief, there are a number of options.)

How does this work? When we explored ritual performance near the beginning of term (with anthropologist Victor Turner), we looked to Barack Obama’s 2008 acceptance speech (available on Youtube) to help us understand the moment of a ritual subject’s “reintegration” into a community. (The context, from our reading, was a new leader preparing to take up the mantel of authority.) Paying attention to Obama’s tone, his affect, the stage set-up, and his choice of words, we were able to talk about the role his “community” – voters; actors on social media; producers and consumers of more traditional media; denizens in the audience in Chicago that autumn night – played in shaping and affirming his status as winner of the election, an ordinary man who had been through the fires of the campaign to emerge victorious as “their leader”. Today in class, we are watching Justin Trudeau’s 2015 acceptance speech alongside our reading of J.L. Austin’s theory of performative language; we will be analysing the ways in which Trudeau’s vocal performance was crafted to enact his governance ethos and promise all-important “change” to Canadians – in other words, to “do” political things, even before he had done a single, real thing as the new prime minister.

Did you know Justin was once a drama teacher? Outstanding training for PM. (And: he has an arts degree. THAT is what you do with it.)

I sincerely hope that, a year from now, I won’t be switching Obama out for Trump’s victory speech; frankly, Hillary Clinton’s will be (WILL BE) both more inspiring and far more instructive for future students of political performance. At the end of the day, that’s what makes me most angry about this season of Trump trash: he is an utter waste of time, space, and energy, and my students and I have far better things to do with ours.

All this said, I know many of you, especially those of you reading from the U.S., will have brought the election up directly, and at length, in classes; I’d be very keen to hear how you’ve done it, and with what results. Please leave comments! You have my respect and admiration. (And to those of you reading from a campus where guns, concealed or not, are allowed by law, I cannot fathom the risks you take every day to bring up matters critical, if not political.)

3 thoughts on “Talking to students about Clinton vs Trump”