“To be honest, I have no idea where I am right now…”

I knew we were in trouble when the bus driver (SCHOOL bus driver… it was “reunion” weekend at Western, which I reasoned explained why there was not a motor coach to be had within 50km for the night of 1 October) turned off the freeway leading into downtown Toronto and onto the suburban highway that goes North. I had clocked the traffic jam warning on the LED sign we’d just passed; I let myself imagine he’d made a snap decision to go up and around the snarl. Smart.

But no. As it turned out, his GPS had taken him off course. And since he hadn’t been to Toronto in, oh, 25 years… well, here we were astride the 401, North America’s most congested highway, and the bus driver was a puddle.

So began the excursion I led to Nuit Blanche, Toronto’s all-night art “thing”, a couple of weeks ago. NB, for those not familiar, is an art and culture over-nighter that officially started in Paris in 2002 (although it traces its routes to Nantes, a small French city, and back to 1984); the idea is to set citizens free in the city from sundown to sunup, and to turn otherwise uninviting (or frightening) urban spaces into welcoming hubs of creation in order to entice their visits. Toronto has had a Nuit Blanche since 2005; I’ve been following it closely since 2008, when my friend and colleague Laura Levin and I went in search of zombies… and discovered instead the festival’s intrinsic ties to the rhetoric of urban creativity then sweeping North America – the one pushing former manufacturing centres to convert to zones of hipster gentrification OR DIE TRYING.

BUT. It was still a lot of fun!

I’ve taken students to NB in Toronto before, and we’ve had a wonderful, illuminating time (click here for more). But this year I had a record number: 20 undergraduates in my performance studies class, plus 10 grad students studying the vicissitudes of art-making in the global city. Together, we made a bus load’s full – and at $30 a head return (downtown Toronto is 100 miles/200km from our university) a full bus was all I needed to break even. So I doubled us up and booked the big yellow submarine (though I won’t be doing THAT part again…). And then I thought:

Herewith, the story of the strategy. 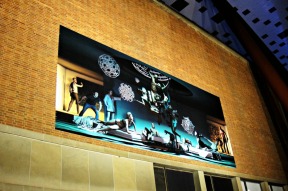 (All photos by Camille Intson)

To start, I decided on the buddy system. Twenty undergrads, mostly sensible, mostly engaged with the idea of performance as a public good, mostly sensible. (Did I mention sensible?!?) Plus 10 grad students, eager to demonstrate No Longer Undergrad Status (NLUS), and sensible in every way necessary. Partnering up seemed a win: give a couple of grads to a quadrille of undergrads and voila – nobody gets lost, nobody dies.

And on the whole it worked! With one exception (the bunch of ’em are still arguing over who ditched whom… though my sense is nobody is holding a grudge), the groups hung together and helped one another to find a pathway through the event, discovering food, coffee, and some firm ideas about what, exactly, this event DOES for both the city and its citizens along the way. Everyone turned up at the rendezvous on time at 1am, and in general they seemed sated, if exhausted. WIN, WIN.

Next, I minimised the prep. Last time out, we spent a class (me + the undergrads) planning the trip. That made sense in context: we were 8 total, and we all hung together (mostly) as a result. What to see? Everyone got to choose something to hit over the course of the night, and we charted a route together.

This time, given the ad-hoc groupings, I decided to let the students work it out for themselves: I gave them the event URL and encouraged some light research. I also imagined spontaneity would be a boon. Why overplan when, really, the point is fun?

Ten years on, Nuit Blanche TO is quite commercial, a bit underwhelming, and largely an exercise in thinking about who the city is for, and who benefits from a “carnival” atmosphere. Better just to go full carnival and think about it later…

Finally, I figured out my part in it. This took me a while. Which group would I join? It seemed nonsense to be with only one (and patently unfair). But obviously moving through the event alone was silly too: the point was not for me to “do” Nuit Blanche (mostly, they’re all the same…), but to watch the students do it for the first time, experience the excitement of the big gets, and feel the let-downs of the pieces that promised the moon prematurely.

I cracked it only the morning of, in fact: I’d circulate, just as I did in class during group exercises, but with a bit more (physical) space between the groups. I duly made sure all the grad students had my mobile number and vice versa, and then we made a plan to text each other coordinates at various points in the night. I’d text something like, “I’m at X, where are you?” and according to responses I’d plot a route to the next group. I worked out that I could spend roughly an hour with each bunch, excluding commuting time, and that turned out to be perfect; at the end of the night I even had 45 minutes to spare (which I used to grab hot cocoa from Dark Horse’s pop-up in 401 Richmond, and then hit the Spacing Store for a Halloween present for a good friend’s twins).

The bus driver was, no word of a lie, SERIOUSLY freaked out by the Nuit Blanche traffic, even well after midnight, but planning ahead meant we boarded by 1:30am, and I was home at 4am. Sure, the white-nighter (hello, past self!) fucked me up a bit…

But it was worth it.