I’ve been traveling in England this week, seeing friends I don’t often see. Such a pleasure! But a strange thing keeps happening: many of them have followed our hello hugs and smiles with questions about how I am doing, and queries about what they sense has been a very hard term for me. This is strange because I actually feel like my term was totally good; I’m in a pretty good place right now. Huh?

Their reactions have made me realise that I’ve been whinging a lot here, and on Facebook (which I use to keep up with far-flung friends, NOT for news purposes!), and probably unreasonably so. FB in particular is a platform that encourages catastrophic highs and damaging lows: hit “like” and its cognates to celebrate my totally amazing wins and my horrible devastations in equal measure! When things cook along normally that’s pretty boring, social-media wise; we don’t post that shit, because it would sink like a stone. No wonder all our lives seem like roller coasters now.

So, having to explain (a bit bashfully) to my dear pals that I’m actually doing pretty well has reminded me of how true that is, and in this year of years how lucky I am to be able to say that. I hold a very stable, well paid job in a stable democracy. I have access to free health care, and functional insurance if I get sick. I have my own, safe home. I have a strong support network. I hold two G7 passports, which means I get to move around the world virtually seamlessly, often without having to talk to any border guards when I do.

This morning, while walking along the South Bank on a rare sunny day, gazing over the millennium bridge at St Paul’s and watching the light dance on the dirty river, I totted up this good fortune. And I realised that my current well-being is rooted entirely in my spatial privilege. It is based, on one hand, on my total stability, my firm sense of self-in-place, and on the other on my mobility, my freedom to walk anywhere, fly anywhere, go anywhere I choose, when I choose. Here, I hasten to add that such mobility always relies first of all on that firm sense of em-placedness (my comfort and safety at home, my salary, my passports that root me in two nation-states): one cannot be without the other, even if you’re the fancy-free, nomad type. 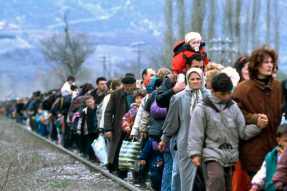 It’s the end-of-year holiday season, which makes a perfect excuse for me to give thanks for the above spatial good fortune. I’d like to do that, here with all of you, by engaging in some critical thinking about space and movement over the next two weeks.

Regular readers know that I care about space a great deal as part of my teaching; for example, I’ve reflected before on how women (teachers and students) are and are not encouraged to take up spaces of authority in the classroom and beyond, as well as on how teaching spaces themselves affect the way we communicate and learn in class. As a preface to the posts to come, I want to claim that, just as being-in-space (safely, unencumbered) is a privilege we share as part of a community but enjoy largely individually, the way we as teachers make space for students – for their experiences, for their differences, as we encourage them to take up space in ways they might not previously have felt able to do – forms a core part of their learning process. It therefore should be central to our teaching practice.

Now seems an acute time to think about matters to do with space and movement in other ways, too: between the ongoing civil war and refugee crisis emanating from Syria, Britain’s recent vote to leave the European Union, and the US’s election of Donald Trump to the White House (to name just three events), lots of us who previously enjoyed both mobility in space and security of place are now seeing those privileges radically curtailed. Many of us have been broken, and equal numbers of us empowered, by recent votes; those feelings, too, translate into spatial practice. In the US and the UK, instants of violence against racial, religious, and sexual minorities have been on the rise; those who believe such violence to be a public good clearly feel empowered to move and behave differently now, compared to six months ago. On the flip side, migrants and minorities in both countries are feeling much less safe in the very places they previously called home, and much less able to move around with the freedom (safety, security) the most privileged among us rarely think about.

What aspects of our spatial privilege do we take for granted? What aspects of others’ lack of this privilege do we simply ignore, or choose not to see? My claim here is that space isn’t just a non-thing, or an abstract thing: it is key to our human wellbeing, and its fracture is the beginning of human end. How might we, then, imagine a different, better way to be in, and move through, space together? (…Especially now that Mr Trump’s cabinet-elect appears uniformly to believe that our shared earth is not in a fundamental state of crisis, and that space is a thing to be conquered, not held and cherished.)

I’ll put some pressure on these questions and the issues surrounding them in the three posts to come this holiday period. On Friday, I’ll offer a reflection on a wonderful, inspiring workshop on “the politics of space”, which I attended two weeks ago at the Lightbox community arts hub in Detroit and which was led by the incomparable dance artist Barak adé Soleil. Next week, I’ll publish my reflections on Phyllida Lloyd and Clean Break theatre’s extraordinary Shakespeare Trilogy, performed by a mixed-race all-female cast at London’s Donmar Warehouse, which I saw last Saturday.

Finally, I’ll start the new year with some thoughts on stuff I’ve learned this year – to my surprise, I have to admit – about the ways in which I lack mobility, and about the spaces in which I don’t feel free. There aren’t that many of them, but they exist; my encountering them this past year has been a blessing, because they’ve really got me thinking. I hope the resulting posts will help you think a bit more about your own experiences of space and mobility, too.

Meanwhile, a happy start to the holiday season, wherever it finds or takes you.