It’s spring break – that is, for everyone who attends or teaches in a grammar school in Ontario. This year I decided, along with several of my cycling friends who are grammar school teachers, that I needed a break break (I spent our Reading Week mostly working and fretting; it was not a break), so I decided to give my students a mid-March channel change. This week, they are working independently while I ride up a bunch of mountains in Table Rock, South Carolina. I’m on my bike 3-4 hours a day and otherwise sitting quietly, catching up on reading, eating (mostly) healthy and abundant food, drinking no alcohol whatsoever, and having a deep think.

One of the things I’m thinking about is the relationship between the assignments on my courses and student learning outcomes. How am I getting students where they need to be, on one hand, and where I want them to go, on the other? I’ve been considering lately how we might talk in new ways – to students, parents, administrators, and each other – about what social goods adhere to arts and humanities learning, and how those goods can be brought to bear on our “creative”, “information”, and “post-truth” economies (choose your adjective – I think they all mean similar things right now, alas). In particular, I’m wondering how we can start that process of revaluation inside the neoliberal university, encouraging administrators at the highest levels to recognise arts and humanities teaching as something to be better appreciated – both affectively, and fiscally – across faculty lines.

So, assignments. It matters what we ask students to do for marks, and not least because that impacts directly who can, or will, take our classes – students might want desperately to learn more about theatre, for example, but might not want to write a bunch of essays because a) they suck at them, b) essays aren’t valued in their home discipline, and/or c) they can’t afford to get a bunch of less than good grades on essays at which they believe they suck. (I recognise the inherent problem with fear of failure here, AND the problem with fear of learning new and hard things – but that’s another post.)

As I’ve been building my new Theatre Studies courses at Western (so far: intro to performance studies [“Performance Beyond Theatres”]; history of performance theory; a study abroad number called “Destination Theatre”), I’ve paid particular attention to alternative assignment submission structures. For example, this term students in both of my courses have the option of creating a traditional essay, a creative essay, OR an audio-video piece for their final projects. Research requirements are the same across all three, but the format options are designed to play to students’ individual strengths and interests.

One thing I’ve not managed to hack yet, though, is in-class presentations.

When I teach dramatic literature classes, I put students in groups and assign plays for scene study; sometimes we do these weekly, and sometimes we run scheduled scene study workshop days and show our labour all together. I’ve done both, each time incorporating Q&A sessions with each group, and they both work really well. The students learn deeply about the plays they are assigned, and they have the creative freedom (built into the assignment) to play around with the text, including the freedom to do a re-write or a physical theatre re-imagining of the work. Over the last decade, consistently students have returned again and again to their scene study texts over a semester or a year, doing superb things with them on essays, final exams, etc. The scene study assignments are both fun and win-win, where deep learning is concerned.

OK, so this ain’t a scene study action shot. But it IS of my students – in last semester’s intro to performance studies – and they ARE making theatre (image theatre, to be precise). Plus, I just really love this photo. The students in the foreground are Olivia Helewa and Muhammed Sameer.

When I teach theory classes, however, I take a different approach. We’re learning a lot of challenging material, and all of it requires a knowledge of context. I scaffold assignments to help students figure out how to make sense of a piece of tough theory; I also invite research into social history and political context.

Right now, for example, my history of performance theory group are doing three short reflection papers. One asks them simply to “explain” the key ideas in a work – that’s it. The second asks them to “apply” the theory to something they’ve recently seen, live or on-screen. The third asks them to “expand” a theorist’s ideas by challenging, or pushing further, one of the more controversial aspects of the theory. They are also each required to do one in-class presentation on one theorist, offering social and political background to help us ground the theorist and their writing in space and time.

In the main, the presentations this year have been fine but not stand-out. The problem, of course, is that students find presentations stressful – and then they speak too quickly, or try to cram in too much information, and so on. They are worried they’ll miss some key point to do with the history; they are worried they won’t get through everything in 10 minutes; they are new to the material and thus unsure about everything they are saying. They are mighty nervous, full stop. 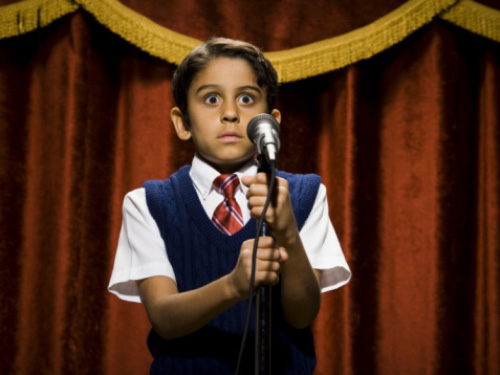 I assign presentations of this sort in part to test this kind of stress; after all, many jobs require human beings to present material they have studied and/or know about in front of other human beings who do not know about it (yet). So learning to present comfortably and successfully in front of a group is a very, very transferable skill – and performance classes should teach it.

And yet. I’ve started really to question my use of the bog-standard context presentation this year. How much value is it adding to student experience in the class overall, and to the arsenal of students’ knowledge about themselves (or even about performance theory!) in particular? This isn’t a public speaking class; I don’t have the time in thirteen short weeks to cover the last 2000 years of thinking about drama and live performance, and to help students become stronger public speakers.

At least, not in this format I don’t.

Which is why, as I’ve been sitting here and gazing out at the Appalachians, I’ve been wondering about presentation alternatives.

The stress that builds up around scene study work is different from the typical public speaking stress I see in one-on-class presentations: it’s creative stress, it’s about anticipation rather than fear or dread, and it tends to be shared among group members in ways that usually work to alleviate rather than ramp up panic. The more I think about it, the more I think it’s ultimately more productive stress than the other kind: it encourages students to work in teams to support each others’ emotional and creative needs, and it requires both resourcefulness and flexibility, rather than just Wikipedia-trolling skills. These are, as my colleague and friend Barry Freeman argued in a recent reflection on the future of theatre studies teaching and learning (in the “Views and Reviews” section of CTR 161), exactly the kinds of skills we as theatre instructors need to provide for a range of learners – they are even more transferable, arguably, to both work and life, than the basic skill of “public speaking”.

I’m now trying to imagine how to incorporate more of my dram lit scene study model into my theory classes. I’m envisioning a “workshop” format for next year’s history of performance theory, in which every couple of weeks groups of students present a scene from a play or another piece of creative work designed to model two or three key ideas from the theorists we are studying. Or maybe I’ll trial a capstone format, where in the last week of class groups of students present creative material they’ve developed in response to one theorist’s work – a scene study, a manifesto, or a theorist “update” for the twenty-first century.

As usual, I’ll be polling this year’s class for their input at the end of the semester. Meanwhile, though, if you teach theory classes, and have creative ideas for in-class presentations, please leave a comment and tell me about it!