High summer! Perfect time to think about, oh, you know: lemonade and sangria, lazing at the beach… and creating complex feminist theatre for a major Shakespeare festival in southwestern Ontario. 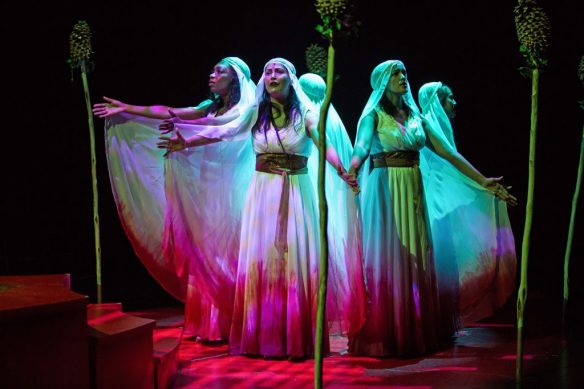 Today in Intermission Magazine – a fabulous, Toronto-based, online performing arts industry publication co-edited by May Antaki and Maija Kappler – I’ve got a piece about the creation of Bakkhai, directed by Jillian Keiley and currently on at the Stratford Festival in Stratford, Ontario.

The article tells the story of how this iteration of Bakkhai (translated from the Euripides by poet Anne Carson) evolved into a complicated work of feminism – that is, into a show that doesn’t celebrate women so much as it reveals the challenges of living as a human being under patriarchy, for men as well as for women, but especially for women (and especially for women of colour).

You can – and I hope you will! – read the whole thing here. (Below, as a teaser, is a brief excerpt.)

When I met the group one Wednesday morning in March, we began with a cheery warm-up game that included every single one of us. I instantly felt part of the team. Then we sang “Happy Birthday” to cast member Graham Abbey, which caused me to experience a minor fangirl moment (I think I hid it well). After this light-hearted start, we sat in a circle, the normal configuration for the “debate and discussion” portion of the cast and crew’s time together. I felt strongly the sense of bondedness, the ethos of community, that animated the space (and that, I later learned from Dunsmore, animates all of Jill’s rehearsal rooms as a matter of course).

When I had agreed to come to the rehearsal, I thought I was stealing an hour of the cast’s practice time in order to “explain” feminism to them. I didn’t realize that I had, in fact, been invited to enter a space of rigorous discussion that the creative team inhabited together all the time. 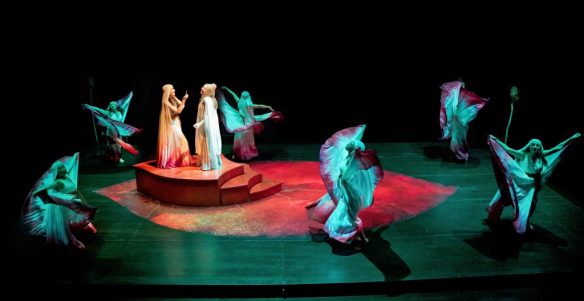 Members of the Bakkhai company.

Bakkhai rehearsals always began with debates over big ideas related to the play-world—is there a god? do we have free will?—in which cast and crew were assigned sides. These provided nuance into the many ethical issues tabled by the play: Do I have a responsibility toward my community to temper my pursuit of pleasure? Should women be supportive of one another regardless of whether or not they like, or agree with, each other? Is violence a just response to personal or community oppression?

But the debates also offered key embodied insight into the experience of fundamentalism—and into just how easily one can become prone to it. As cast member Diana Tso told me, always being assigned sides meant cast members were asked repeatedly to live inside multiple, divergent perspectives, exploring where individual perspectives and orthodoxies originate, when “someone is so pro-this, or pro-that.”

The debates gave the cast a chance to peg their characters’ developments to the social, cultural, and historical contexts shaping the play. Even more importantly, though, they provided an opportunity for team members to get to know and understand one another personally but also intellectually, on a level playing field, and in a room designed to be utterly open, absolutely equal, and completely safe. (This included paying special attention to gendered language. As Dunsmore and Gowdy explained to me, team members of all genders were encouraged to check their use of diminutives like “girls” and “boys”.)

I got a sense of the eclecticism and openness of the cast and crew’s discussion space during that first meeting with them. The cast were warm and respectful, but their questions were hard. If the Bakkhic women are brutal, violent, full of fundamentalist rage, how can they enable a feminist politic? Where do the men fit into a vision that inherently excludes them? (Does it?) With the women being “foreigners,” what role might intersectionality play in a feminist approach to this play? How can we reconcile to feminism the most pressing contradictions in the play—for example, when the Bakkhic women celebrate Agave, but then use her to feed their violent revenge?

I talked about feminism as a critique of patriarchy, and patriarchy as an ideology that deploys both men and women to uphold the damaging binary (men vs. women; men above women) on which its power rests. I explained that women often make the best patriarchs: if you sense you can make the system work for you, you sure as hell are going to try. Together, we discussed feminism as a critical practice that tries to unpack the violence patriarchy causes and also to imagine more equitable alternatives to it. That mandate includes both women and men as participants: as victims, as villains, as supporters, and as resistors.

Feminism, in other words, is not straightforward, and it’s rarely “nice” in any traditional way. Maybe a feminist show shouldn’t be, either.