[Spoiler alert: this post reveals the big secrets of the series’ end, which has not yet been broadcast in North America. Avert your eyes as necessary.]

Many of you may not be surprised to know that I’ve long been a fan – in a love-hate-but-still-must-watch kind of way – of Downton Abbey. (If you read my October post about being seduced by Poldark and Outlander, you’ll have worked out as much.) I know there are loads of problems with the show, and that I am a Bad Academic for falling for it as early as I did; one of my theatre history colleagues, the dear and brilliant Bridget Escolme (Bridget! Where is my guest post?), reminds all and sundry on a regular basis that Downton is particularly egregious for misrepresenting class politics in England in the early 20th century. No, friends, rich people did not, in fact, treat their servants quite so nicely. But it does make for great television.

What Downton has been generally good at, however, is bold and interesting female characters. For me, the show has often captured something of the spirit of the fin-de-siecle New Woman: outspoken, with a willingness to question norms and boxes, as well as an urge to take real risks. (Caveat here: the boldest women on the series are typically those with the most cultural and political privilege. That such is broadly historically accurate makes it no less worth marking.) Like many, I mourned bitterly the loss of Sybil, the renegade youngest Lady Crawley (played by Jessica Brown Findlay, who reportedly left the show rather than get too comfortable in the role). Sybil somehow embodied the coming force of modernity in a nutshell. Refusing to compromise on her own happiness she married the (not-socially-appropriate) man she loved, the chauffeur Tom, and encouraged one of the estate’s maids to dream of better things and then make those dreams a reality. (The maid returns, in an unexpected and fascinating way, in the final season.) Sybil’s death in childbirth struck me as gratuitous and unsympathetic, turning one of the show’s most powerful political voices into just another maternal statistic, but it did not prevent the series from going on to reimagine Lady Mary, the doyenne in waiting, as the estate’s proper agent, while Lady Edith, the middle child, took over her late boyfriend’s magazine and turned it into a proto-feminist success.

Nor did Sybil’s death halt the momentum of what I think of as the show’s real reason for being: the progressive plot lines that feature the staff, buoyed by their unbelievable relationships with the upstairs folks. As the series progressed it was Daisy and Mr Molesley who became the “downstairs” stars, with Daisy in particular standing up for class rights loudly in the final season. Thomas Barrow, the “evil” under butler, also became an increasingly interesting, if annoyingly pitiable, character in the role of the queer man unable to break free of the holier-than-thou shackles of service culture. (Frankly, I think Thomas B should get his own spinoff; I want to watch THAT show. Rob James-Collier deserves it.)

Clearly, I have spent far too much time thinking about Downton Abbey. And so it was that I tuned in eagerly, if a bit bashfully, to the final series on ITV this fall. (North Americans: Santa comes in January.) What exactly was I hoping for? Don’t get me wrong here. I know the extreme limits of Downton – after all, it’s sexy history on sale in the era of late modern neoliberal capitalism, the ultimate austerity diversion. When Daisy raised her budding communist fist against The Man early in the season, I was both disappointed and totally not shocked that she a) was completely unsuccessful in moving anyone to her cause, and b) ended up being “saved” by the grace of Lady Grantham. At series’ end, though, Daisy passes her exams with flying colours – and can look into a future that, maybe, holds something better than service to the Crawleys in the big house. Mrs Patmore’s bed and breakfast is up and running, though she continues as the Downton cook; the sentimentality on which the show thrives would never envision such a stalwart abandoning the fams. But I like to imagine that she works out for herself, not too far into the World Beyond Series’ End, that running a small business is way more satisfying than running Downton’s kitchen.

Then, however, there’s Edith.

“Poor Old Edith” is a bit of a meme now; it’s famous for being Lord Grantham’s typical paean to his middle child, and it returns handfuls of times through the series. It’s a joke, too – insofar as Edith is framed as the ugly-duckling sister who is neither ugly (Laura Carmichael is absolutely stunning, both in costume and not) nor helpless or hopeless; in fact, while Sybil is being ostentatiously outspoken Edith chips quietly away at the patriarchy. As the blogger known as superfluousbananas puts it, aptly:

– Raised a daughter in secret

– Put up with an older sister who constantly demeans her

– Been jilted at the altar, lost her lover to Nazi Germany, and had her younger sister and brother-in-law die, but still opens her heart to love.

I think we can stop calling her “poor old Edith”.

Downton has beat Edith up a bit, but still she survives. Quite a lot like Thomas Barrow, in fact – except she’s not a staff member, but a Lady Crawley. And, given the show’s relentless insistence on the aristocratic Crawleys’ own survival despite the changing social and economic times, I expected Edith, finally at series’ end, to achieve some measure of happiness. Maybe some sexual fulfilment. The things that a strong, independent, culturally powerful woman, writer, publisher, and mom should be able to hope for.

Ah, hope. So what does Edith actually get in Downton‘s twilight showing? She gets dumped by Bertie, the man who professes to love and adore her early in the season when he meets the “real” Edith – the working Edith – on the street in London. His problem? Edith has not revealed to him that Marigold, her “ward”, is actually her daughter by her previous, long-term boyfriend Michael Gregson, who was killed off – for being a bit of a rebel (Julian Fellowes, I sense a disturbing pattern here). Edith and Bertie go quite some distance down the road before Lady Mary – insert shocked emoji here! – decides that breakfast is the time to tell on Edith and Marigold. Bertie still loves Edith, but can’t get over the betrayal; worse still, Edith accepts this version of events. Never mind that she can be completely forgiven for imagining, circa 1925, that her partner-to-be might struggle to come to terms with a child out of wedlock; never mind that she was simply protecting her interests in the same way any man born of aristocracy would do in her place. Bertie calls her out for hypocrisy and lack of faith, and Edith acquiesces. Inside, I slowly start to die.

Am I surprised by any of this? Intellectually, of course not. Downton Abbey follows a well-worn soap-operatic script, and both Edith and Mary (who is rewarded for her betrayal of her sister with a new race-car driver husband) fit character types from that script to a T. But here’s the thing: Downton Abbey may be a historical soap opera about fading post-war aristocratic glory on the surface, but beneath that very thin veneer it’s about us, living shell-shocked lives in 2015. It’s a celebration of wealth and privilege at a time when so few enjoy either. It’s a pretence to care about the futures and livelihoods of those who serve at a time when more and more of us work in service jobs – with a requisite smile – and hate it terribly. It’s a world in which women who push too hard against the barricades don’t get the things they really want – though they do get to be venerated as survivors. Our final glimpse of Edith telescopes her playing with the Downton children, looking strangely upbeat about a future now beyond the frame, confined to fans’ hopes, longings, imaginations.

Here lies Downton‘s real emotional power, I suspect: it seduces audiences, week after week, to look to it for impossible hope, directing toward it our yearning, our craving, for something better. It grants and withholds, the former less and the latter more, so that we keep believing something better will yet come, against the odds. For Daisy, for Mrs Patmore, for Thomas Barrow; for Edith; for us.

So here’s where I say, again, that if a feminist, a teacher, and a scholar like me can get pulled so completely into this kind of seduction it speaks volumes about the astonishing power of cultural products like Downton Abbey to turn even the smart and the cynical into hopers and believers, to our own collective detriment. We live in a political and economic moment when so many of us are so very vulnerable to narratives of futurity, of deferred hope. Does Edith deserve to lose her happiness? Of course not, but… there’s one more Christmas special coming, right? Surely Bertie will return. Thomas survived his suicide attempt; his job looks safe now. Surely he’ll eventually succeed Mr Carson as butler, the job he’s always wanted! And Daisy? Her future lies in store. She’s smart enough, and tenacious. She’ll be ok on her own. 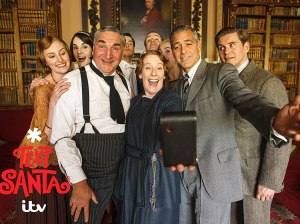