Tomorrow is mid-term election day in the U.S.; my best wishes to all of my American readers, colleagues, and friends.

It’s an understatement to say that this is an important election. It is an election that may well determine whether the U.S. returns to some semblance of its pre-2016 self, for all its flaws and troubles, or pushes closer to the brink of genuine fascism.

This frightens me, as I know it frightens many of you. Depending on where you teach, it may also frighten your students. Or, it may be they are tuned out, don’t care too much.

I’ve been thinking a lot about this lately, too.

I’ve been working slowly over the past year on a new research project about the place of theatre and performance education and training in the contemporary university. (This is a collaborative project – a big hello to Kat, Diana, Sylvan, Rebecca, Barry, and many more of you out there.) At the core of this project is one essential belief: that learning about, and learning to make, theatre and performance is akin to learning about, and learning to make, a healthy, supportive, socially progressive democracy. For this reason, theatre and performance studies are not just “niche”, nor are they “just” creative arts. They are about learning the art of genuine citizenship – and should be recognized, funded, respected, and promoted that way by university leaders. 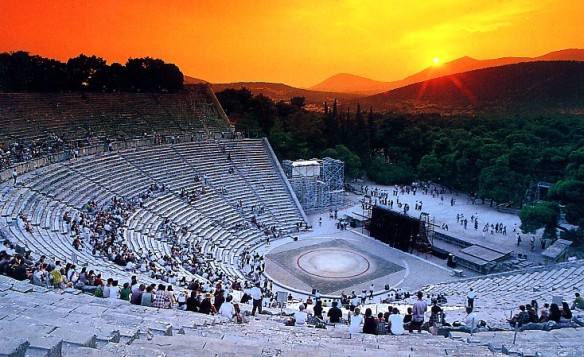 The Theatre of Epidaurus at sunset. The Greeks knew it.

Today feels like a good day to reflect on the firm, urgent bond between theatre-making and democracy-building. What is theatre, after all, except a creative endeavour in which a group of human beings research, practice, struggle over, and negotiate the challenge of inhabiting the attitudes, beliefs, prejudices, wisdoms – as well as the geographical and socioeconomic and cultural and historical contexts – of a group of other human beings? At its most basic, acting is the art of the proverbial walk-a-mile-in-another’s-shoes gesture, the central act of empathy that binds us to our fellow citizens (and to those among us who are not so privileged as to be our fellow citizens yet – the hardest stretch of all).

Actors say repeatedly and vehemently that it is not possible to play a character in whose experience you do not, on some level, have faith; you may be far, far from that character’s context or politics or even sense of human decency, but without some basic understanding of who that character is, where their actions come from, and how you as a human being are linked to them as a human being, no creativity can come.

The portrayal of another without even a smidge of shared understanding would result in stereotype, and nothing more.

(Brecht devotees, I am among you. But performing Brechtian distance is not the same thing as acting without empathy or emotional investment. One of my favourite clips to show students when I talk about this kind of thing is from a French documentary made about a decade ago for ARTE, about the acclaimed British touring company Cheek By Jowl. In the clip, Tom Hiddleston talks about what it feels like to play two diametrically opposed characters in the same production of Shakespeare’s Cymbeline. His thoughts are compelling and resonant, and represent how closely Stanislavskian or “system”-style acting is to Brechtian or “alienated” acting, at its core. [Click through to the middle to find Tom.])

But theatre is about more than the empathetic bonds actors build with characters and with one another, of course. It is also about the fundamental challenge of collaborative world-building. You start with a script, or maybe just an idea. You play. You devise scenarios from held objects. You think about design, about scene structure, about set architecture. You select patterns to draw out – then you argue about whether or not these are the right ones. The contours of your world emerge from your shared graft, energy, arguments – creativity.

I have shamelessly snatched this evocative image of 12 Minute Madness from alt.theatre’s website; please click through to read my colleague Kelsey Blair’s terrific review of this production. Thanks and apologies to alt!

It’s hard to be sure – lots of feelings circulate in the rehearsal hall and sometimes they are ugly. But you have a shared project to make – a world to build together. The world must go on! So you return the next day, patch it up a bit, move on together, and the suture strengthens. You keep building.

So far so true, you might be thinking. But what about studying theatre, in academic (not practical or conservatory) programs like the one on which I teach? Like all critical liberal arts, academic theatre studies requires teachers and students together to enter into a shared world built by others, for others, and then undertake the challenge of really, carefully thinking through what is at stake in that world: what social claims are on the table, for whose benefit they have been tabled, and at what potential costs.

This is the work I’ve been doing every week with the students in my new experiential learning class, “Toronto: Culture and Performance”. We read (via a team of student leaders on each production, who build a wiki-page of intel for us in advance) about the place, the artists, the history and the ideas behind a production; then we see that production together, ask questions afterward of the artists and other makers, and finally return to the classroom for a debrief, held alongside a discussion of relevant readings. We investigate a world – with empathy for the makers and yet also with questions about their choices, as well as about the social, economic, and demographic constraints that have shaped their work. We ask each other what the work is meant to do for a community (Toronto and its many constituencies), and what the work seems to want to say to us.

We respect the work but push hard back on it. Which is to say: we do the work of citizens in a democracy.

I know not all classes can, or should, look like this one. (It’s a lot of work to run and expensive, too.) And yes, I also know that not all theatre practice looks like the idyl I describe above. Lots of artists are total jackasses. Lots of us prefer to nullify rather than negotiate difference in rehearsal. Lots of us are egomaniacs and practically dictators when we hold the director’s baton. (So: pretty much like your average democracy, then!)

But that’s all the more reason for us to remember, today, what theatre – as a practice, a study, an art form, and a form of worlding – at its best teaches us, and what we as teachers consequently need to share with our students. Theatre shows us how to act like proper citizens, regardless of the day: how to care for one another, how to care for our world as if we are all invested in it, and how to contour that world as if it is for all of us to experience, appreciate, negotiate, and enjoy.

This is the message I want to send my students, tomorrow and everyday, about what learning in our shared classroom means. About what I as a teacher believe in.

I hope you’ll pass it on!